The Soviet-German composer Alfred Schnittke is known as one of the most exciting post-war symphonists. His overpowering music has featured on the programmes of the Belgian National Orchestra numerous times. We now present the Belgian premiere of what may be Alfred Schnittke’s most demanding work: a ballet with a large orchestra over two hours long, entitled Peer Gynt. Not a concert performance but one staged by a young team under the supervision of Mien Bogaert.

Peer Gynt is first and foremost a play by the Norwegian playwright Henrik Ibsen. He wrote this long, dramatic verse poem in 1867. Like Goethe’s Faust, Peer Gynt has an incredible number of characters, the play takes place in countless locations, and the main character is accompanied by a kind of devil figure. Peer Gynt is the rake who is unable to give his life any direction and prefers to live within his own imagination than to confront reality. He leaves his childhood sweetheart as he feels too unclean following an encounter with the daughter of a troll. He then drifts all over the world for a spell, causing more harm than good, and returns home at the end of his days. There he is ‘redeemed’ in the Faustian manner by his childhood love Solveig – who has been patiently waiting for him all this time.

Ibsen’s story is still regularly performed today. The story of the Norwegian rake gained further in popularity thanks to the theatrical music that Edvard Grieg wrote for Peer Gynt. Collected into two orchestral suites, this music is now among classical music’s greatest hits. The titles of the movements of this orchestral suite introduce us to the key characters: Peer Gynt’s mother Ase, the wealthy farmer’s daughter Ingrid, Peer Gynt’s true love Solveig, the troll king and the exotic Anitra who Peer Gynt seduces in Africa.

The story of the Peer Gynt that Alfred Schnittke composed starts with the American choreographer John Neumeier. He has been ballet director at the Hamburgische Staatsoper since 1973 (and continues to this day). In the 1980s, he decided to create a new ballet based on Ibsen’s Peer Gynt. He commissioned Alfred Schnittke, a composer whose music he had already used a few times in other ballet performances.

John Neumeier wrote his own libretto for the ballet. He largely adhered to Ibsen’s original apart from two significant changes. John Neumeier interpreted Peer Gynt’s wanderings through the world as an attempt to make it in Hollywood as a dancer, actor and eventually a movie producer. As in Ibsen’s tale, Peer Gynt gradually descends into delusions of grandeur. The second major departure is the addition of a 25-minute epilogue.

‘When I attend theatrical versions of Peer Gynt,’ says John Neumeier, ‘the ending is always a disappointment. Solveig has waited so long for Peer but when he finally makes it back to her, the piece is immediately over. I want to experience their togetherness, how they gradually grow towards each other, the emotions they go through... the epilogue is the spiritual and metaphysical core of the whole piece: an endless adagio, a ritual coming together beyond all that is real.’

‘Uniting serious and light music, that is the purpose of my life,’ Alfred Schnittke once claimed: ‘even if I break my neck doing so.’ Until 1990, this Soviet-German composer and pianist lived and worked in Moscow. There, he developed over time a polystylist composition technique inspired primarily by Charles Ives, Luciano Berio and Bernd Alois Zimmermann. Along with chamber music, concertos and symphonies, Alfred Schnittke wrote music for around 70 different films. These extremely rich scores have been rediscovered since the turn of the millennium. Following the collapse of the Soviet Union, Alfred Schnittke moved to Hamburg where he passed away in 1998.

Polystylism is still a relevant term with which to characterise Schnittke’s Peer Gynt. The score unites in an extremely exuberant fashion the heritages of composers like Shostakovich and Mahler, the serialism of Darmstadt, jazz, tango and so much more. Even so, Peer Gynt is more than a colourful potpourri of musical quotations that are in turn used in improper, ironic and even monstrous ways. The ballet music in the first movement – illustrative and laden with clichés – returns in alienate form in the third. Ultimately it becomes clear that the three movements are one great musical prologue to the majestic epilogue. All of the musical material recurs but from a different perspective. Sub species aeternitatis. Five choirs (on tape) produce shadowy sounds that immerse the listener in an almost mystical experience.

In 1985, Alfred Schnittke suffered his first heart attack. He was unconscious for several months and was declared  clinically dead three times. The neardeath experiences that he recalled on awakening formed the main inspiration for the music in the epilogue of Peer Gynt.

The Belgian National Orchestra is working with Klarafestival and Bozar on the Belgian premiere of Schnittke’s Peer Gynt and has recruited a young team under the guidance of director and scenographer Mien Bogaert to stage the work in the Henry Le Boeuf Hall. A massive installation is constructed above the orchestra, conducted by the Danish conductor Michael Schønwandt, in which two dancers and an actor (live and in videos) depict the original characters from Ibsen’s Peer Gynt. The choreography is by Talitha De Decker. Benjamien Lycke has created the videos.

Costume designer and make-up artist Dennis Peschke has put a quasi-naked Peer Gynt, the young man who does not want to grow up and suffers from delusions of grandeur, on the stage with a paper crown, underpants and his own dancing body as the only sources of meaning. ‘All of the characters that Peer meets are part of his imagination and wear masks. They do not represent reality but embody the visions of fear from which Peer is continually on the run. Only Solveig wears no mask. She is the only one who has direct access to Peer.’

‘Peer Gynt is that part of our personality that shoves unpleasant truths aside in order to be able to get on with life,’ says Mien Bogaert. ‘Knowledge is not the problem. We all know that our current lifestyles are not sustainable, that everything we consume harms someone and that – if we’re very pessimistic – our presence on the planet does more harm than good. But yet we live. Peer Gynt is the spark of irrationality that condones our behaviour every day. That spark, that which makes us human, conceals an incredible dose of beauty.’ 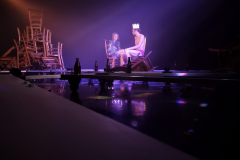 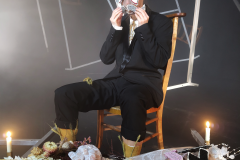 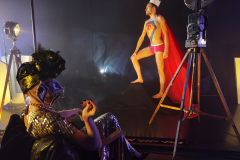 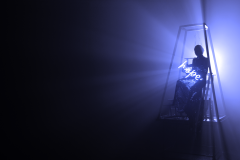 Maris Gothoni is the new Head of Artistic Planning

Wake up with Brass and Percussion