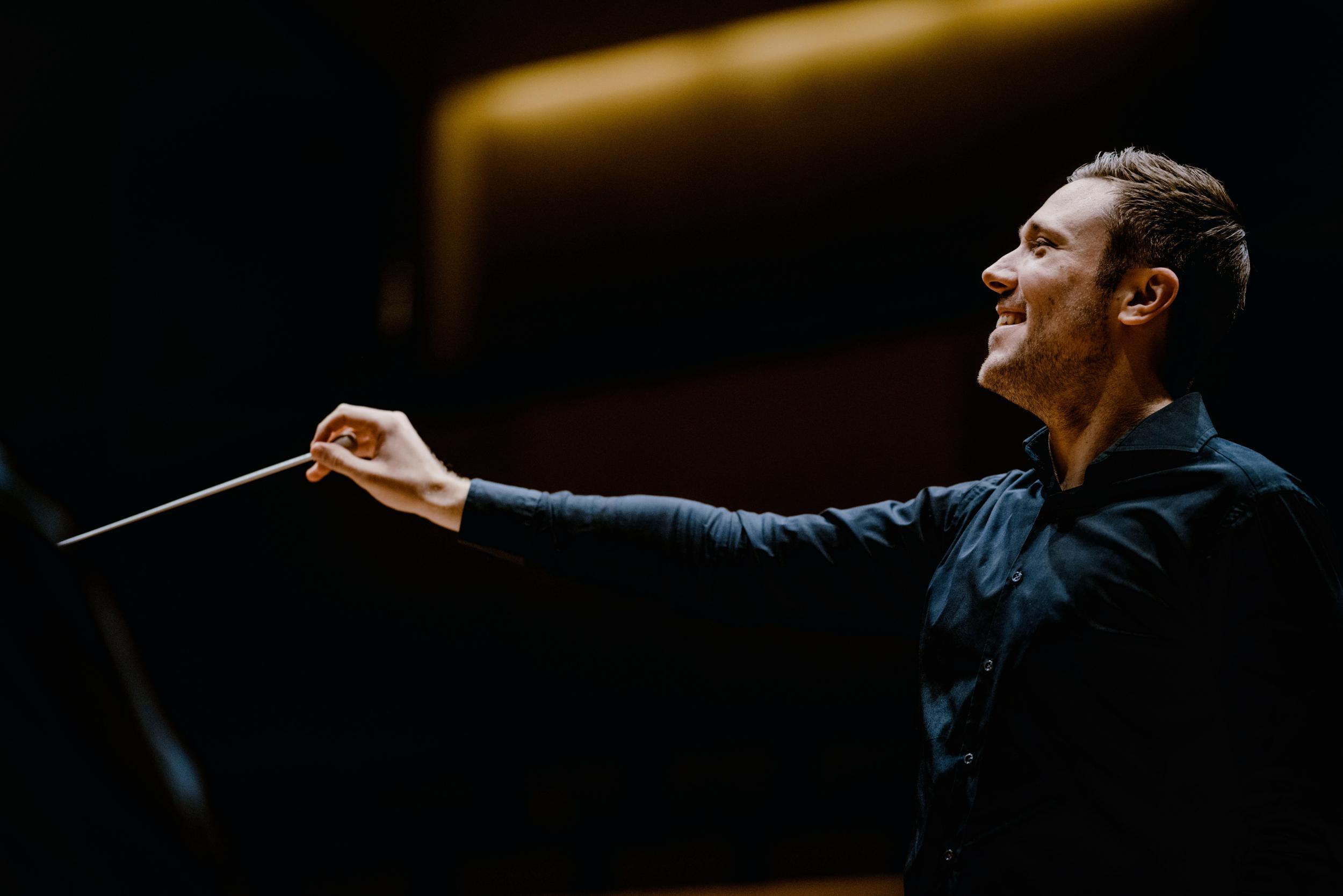 After two highly successful concerts with the Belgian National Orchestra in 2020, the young Spanish conductor Roberto González-Monjas is ‘principal guest conductor' as of this season. He conducted his first concert in this capacity on 28th November at Bozar, with Saint-Saëns' Organ Symphony and Cello Concerto. Cuurrently, he is on an eight-day UK tour with the musicians of the Belgian National Orchestra, and on Sunday 13 November 2022, to conclude the tour, he will conduct a second concert at Bozar. On the programme of that concert will be César Franck's famous Symphony in D minor and Mozart's 25th Piano Concerto. Time for an interview, conducted in between rehearsals just before he left on tour!

How are rehearsals with the orchestra going?

RGM: Fantastic! The last two times I stood in front of the orchestra was in the middle of the pandemic: with masks and Plexiglas screens between the orchestra members. I saw virtually no faces. Back then I was really looking forward meeting the orchestra members in a more free way. Without masks, making music together, laughing together, talking together. And that is happening now! We are currently preparing two-and-a-half programmes: the tour and the concerts at Bozar. The rehearsals are particularly intense and deep: I feel that the orchestra really loves to work hard in order to make good music. Moreover, the repertoire we are playing now, César Franck and Saint-Saëns, two highly romantic French composers, is right up their alley. Unbelievable how sensitively, how passionately they play!

Lately you have been omnipresent: music director in Winterthur, music director in Sweden, the Iberacademy in Colombia, soon your engagement in Galicia ... How do you manage to combine so many different positions?

RGM: The key is good planning. Conductor jobs are fixed years in advance, which of course helps. The choice of repertoire is also crucial. When I am in front of an orchestra, I want to be 100% prepared and have a vision of the score that is worthwhile. That has to be prepared to perfection. Discipline is very important here. I try to spend my time as well as I can: practising, studying, playing sports ... However, the end goal I keep in mind is to be happy, not to be stressed. And being able to transmit that feeling to an orchestra. What you want to avoid at all costs is flicking through the score shortly before the rehearsal.

Do you keep a daily routine?

RGM: Not really, because I am on the road a lot for concerts. I do try my best to be a healthy person - by doing sports, by my lifestyle. Another important thing is that I feel at night that I have done enough during the day. Then I can go to sleep knowing, I’ve done what I could. Doing nothing does not make me happy, I am hyperactive by nature.

You began your career as a Konzertmeister and as a solo violinist. Has that influenced the way you stand in front of an orchestra now?

RGM: Yesterday, an orchestra member told me that I work with the orchestra as a violinist. And yes, that's true. Because I played in an orchestra myself for so many years, I can smell it if I talk too much, if the rehearsal takes too long, or if people are not concentrated enough. In that case, I adjust my rehearsal so that the musicians also have a good time. Or sometimes I insist, if necessary. Yes, my experience as an orchestral musician hasn't hurt me yet!

You will tour with top British pianist Paul Lewis, who also plays the concert on 13 November at Bozar ...

RGM: A first-class pianist, that has been around since I was a student! I am now working with this inspirational man for the first time. He is incredibly aristocratic in the sense that he just puts himself at the piano and plays: clear and seemingly effortless. Sometimes with soloists you have to spend three hours discussing a work of barely 13 minutes. Paul omits all that: with him, you just make music. Yesterday I rehearsed the Mozart concerto with him. Ego-free, unpretentious playing. No orchestra versus soloist, but an intimate collaboration. I am so happy with him!

Mozart is one of your favourite composers. How do you approach his music?

RGM: I consider performing his music to be perhaps the most difficult thing there is. You don't just play Mozart: no, he was a genius and every note has its meaning. So you have to question the what, how and why of each note. Get to the bottom of the rhetoric of his music. Only then you can perform Mozart perfectly and only then the miracle happens. His music requires harder work than the music of any other composer.

The tour across the UK takes you through seven different cities. Are there any concert halls you are particularly looking forward to?

RGM: The whole fact of a tour is something special and to look forward to: the orchestra just goes that extra mile. And the orchestra members are also really brought closer together. The great thing about the UK is the mix between old, historic halls like The Usher Hall in Edinburgh or Cadogan Hall in London, with impressive organs and a theatre-like atmosphere, and more modern constructions, like the Birmingham Symphony Hall and Bridgewater Hall in Manchester. The British have a fantastic tradition of concert halls that are almost cathedrals for culture. I am looking forward to each of the eight concerts!

Will there be much difference between the first and the last concert?

RGM: Oh yes! As I often say: I don't like copies. Music happens in time. Without time, music is just a piece of paper that doesn't resonate. And every performance is different, because of the acoustics, the mood of the musicians, the time of day ... Such differences should not be regretted, but celebrated. The more you perform a piece, the more flexible you are to create in the moment. As a conductor, my job is to deliver an exciting interpretation every night.

What significance does César Franck's Symphony in D minor have for you?

RGM: That symphony is very much connected to Saint-Saëns' Organ Symphony. When Saint-Saëns premiered that work, he sent the message to all France that the symphony was a genre still worth practising. Quite a few French composers heeded that message and subsequently started composing symphonies, César Franck being one of them. His Symphony in D minor is a very complex work: very cerebral, very intellectual. You could also call it an 'organ symphony without the organ'. After all, César Franck was a magisterial organist and the way he composes - the orchestration, the tempi, the texture - is indebted to him. Above all, the Symphony in D minor contains a lot of deep emotion. It is both a modern symphony and a work that also looks back sentimentally to Baroque, Classicist and early Romantic times. All these influences are mixed together to create the phenomenal Symphony in D minor – a real masterpiece.

You open the concert at Bozar on Sunday 13 November with Mikhail Glinka's Ruslan and Lyudmila Overture.

RGM: Yes, an extremely virtuoso overture! The bottle of champagne before dinner: an exploding work full of bubbles. Very short, very fast, in other words: the perfect prelude to the more serious music that follows.

As the first guest conductor, what is your ambition with the musicians of the Belgian National Orchestra in the coming years?

RGM: I constantly strive to be a source of inspiration for the orchestra in order to make good music together. Now we are mainly getting to know each other. In the coming years, we will explore a repertoire as diverse as possible. Works from the classical era will remain very important to me, but in addition I also want to sink my teeth into repertoire works from later times. In doing so, my aim is to give each work its own style, its own personality. In time, I hope to develop a good connection with the orchestra so that we need to talk less and play more. That is the ideal situation between conductor and orchestra. Built-up trust allows to take a lot of risks together during concerts. The tour in the UK - many concerts in a short time - will be very meaningful in that context!