"The American cellist plays as if she were dreaming up the music on the spot, with a fluidity and passion that induces goose pimples.”

“A young cellist whose emotionally resonant performances of both traditional and contemporary music have earned her international recognition, … Weilerstein is a consummate performer, combining technical precision with impassioned musicianship.” So stated the MacArthur Foundation when awarding Alisa Weilerstein a 2011 MacArthur “genius grant” Fellowship, prompting the New York Times to respond: “Any fellowship that recognizes the vibrancy of an idealistic musician like Ms. Weilerstein … deserves a salute from everyone in classical music.” In performances marked by intensity, sensitivity, and a wholehearted immersion in each of the works she interprets, the American cellist has long proven herself to be in possession of a distinctive musical voice.

Entering her second season as Artistic Partner with the Trondheim Soloists, Weilerstein joins the ensemble on two European tours this fall, including appearance in Norway, London, Munich and Bergen. Their first album together, 2018’s Transfigured Night released on Pentatone, features Schoenberg’s Verklärte Nacht and both Haydn cello concertos. It attracted unanimous praise, with Gramphone magazine proclaiming, “you’d go far to find performances of the Haydn concertos that match Alisa Weilerstein’s mix of stylistic sensitivity, verve and spontaneous delight in discovery.”

Beyond the partnership with the Trondheim Soloists, Weilerstein’s 19-20 concert highlights include Saint-Saëns’s First Cello Concerto with the New York Philharmonic, Shostakovich’s Cello Concerto No. 2 with Tokyo’s NHK Symphony, Britten’s Symphony for Cello and Orchestra with Zurich’s Tonhalle Orchestra, Schumann Cello Concerto with the Houston Symphony, Barber Cello Concerto with the Detroit Symphony, Strauss’ Don Quixote and Bloch’s Scholmo with the San Diego Symphony, and Elgar’s Cello Concerto with the London Symphony Orchestra, both at the Barbican in London and the Philharmonie in Paris. In recital, she gives solo performances of Bach’s complete cello suites in California, Barcelona, Manchester, and joins her frequent duo partner, Inon Barnatan, for Brahms and Shostakovich at London’s Wigmore Hall, Milan’s Sala Verdi and Amsterdam’s Concertgebouw. To celebrate Beethoven’s 250th anniversary, she rejoins the Israeli pianist for a U.S. recital tour of all five of the composer’s cello sonatas, besides playing Beethoven’s Triple Concerto with Guy Braunstein, Barnatan, and the Dresden Philharmonic. Her recording of the concerto, featuring Alan Gilbert, Stefan Jackiw, Barnatan, and the Academy of St. Martin in the Fields, is due for release by Pentatone this fall.

Weilerstein kicked off the 2018-19 season in collaboration with the Trondheim Soloists, before performing Dvořák’s Cello Concerto on a U.S. tour with the Czech Philharmonic, Shostakovich’s Second Cello Concerto with five orchestras (the Gothenburg Philharmonic, Orquesta Nacional de España, Orchestre de Chambre de Lausanne, and Toronto Symphony), Schumann’s Concerto with the Rotterdam Philharmonic, and works by Saint-Saëns, Britten, Richard Strauss, and Bloch in cities from San Diego to Vienna. With the composer leading both Copenhagen’s DR SymfoniOrkestret and the Cincinnati Symphony, she reprised Matthias Pintscher’s new cello concerto Un despertar, a work written for her that she premiered in 2017. She also toured Europe and the U.S. with Barnatan, violinist Sergey Khachatryan, and percussionist Colin Currie, and rounded out the season with complete Bach cello suite performances in Beverly Hills, Berkeley, Boston’s Celebrity Series, Paris, and Hamburg’s Elbphilharmonie.

Weilerstein’s growing and celebrated discography includes a recording of the Elgar and Elliott Carter cello concertos with Daniel Barenboim and the Staatskapelle Berlin that was named “Recording of the Year 2013” by BBC Music; the magazine also featured the cellist on the cover of its May 2014 issue. Her next release, on which she played Dvořák’s Cello Concerto with the Czech Philharmonic, topped the U.S. classical chart. Her third album, a compilation of unaccompanied 20th-century cello music titled Solo, was pronounced an “uncompromising and pertinent portrait of the cello repertoire of our time” (ResMusica, France). Solo’s centerpiece is the Kodály sonata, a signature work that Weilerstein revisits on the soundtrack of If I Stay, a 2014 feature film starring Chloë Grace Moretz in which the cellist makes a cameo appearance as herself. In 2015 she released a recording of sonatas by Chopin and Rachmaninoff, marking her duo album debut with Inon Barnatan, which earned praise from Voix des Arts as “a ravishing recording of fantastic music.” In 2016 she released a “powerful and even mesmerizing” recording (San Francisco Chronicle) of Shostakovich’s cello concertos with the Bavarian Radio Symphony and Pablo Heras-Casado.

Weilerstein has appeared with all the foremost orchestras of the United States and Europe, collaborating with conductors including Marin Alsop, Jiří Bělohlávek, Thomas Dausgaard, Sir Andrew Davis, Gustavo Dudamel, Sir Mark Elder, Giancarlo Guerrero, Bernard Haitink, Marek Janowski, Paavo Järvi, Lorin Maazel, Cristian Măcelaru, Zubin Mehta, Ludovic Morlot, Yannick Nézet-Séguin, Peter Oundjian, Donald Runnicles, Yuri Temirkanov, Michael Tilson Thomas, Osmo Vänskä, Simone Young and David Zinman. Her major career milestones include an emotionally tumultuous account of Elgar’s concerto with the Berlin Philharmonic and Daniel Barenboim in Oxford, England, for the orchestra’s 2010 European Concert, which was televised live to an audience of millions worldwide and subsequently released on DVD by EuroArts. She and Barenboim reunited in 2012-13 to play Elliott Carter’s concerto on a German tour with the Berlin Staatskapelle. In 2009, she was one of four artists invited by Michelle Obama to participate in a widely celebrated and high-profile classical music event at the White House, featuring student workshops hosted by the First Lady and performances in front of an audience that included President Obama and the First Family. A month later, Weilerstein toured Venezuela as soloist with the Simón Bolívar Symphony Orchestra under Gustavo Dudamel. She has since made numerous return visits to teach and perform with the orchestra as part of its famed El Sistema music education program.

Committed to expanding the cello repertoire, Weilerstein is an ardent champion of new music. She recently played the world premiere of Pascal Dusapin’s Outscape, giving it “the kind of debut most composers can only dream of achieving” (Chicago Tribune) with the co-commissioning Chicago Symphony, before European performances with the Stuttgart and Paris Opera Orchestras. The following season she premiered Matthias Pintscher’s cello concerto Un despertar with the Boston Symphony Orchestra, which co-commissioned the piece for her, followed by a reprise with the Danish Radio Symphony. She gave the New York premiere of Pintscher’s Reflections on Narcissus under the composer’s own direction during the New York Philharmonic’s inaugural 2014 Biennial, and subsequently the two also performed the work at the BBC Proms. She has worked extensively with Osvaldo Golijov, who rewrote Azul for cello and orchestra (originally premiered by Yo-Yo Ma) for her New York premiere performance at the opening of the 2007 Mostly Mozart Festival. Weilerstein has since played the work with orchestras around the world, besides frequently programming the Argentinean composer’s Omaramor for solo cello. At the 2008 Caramoor festival, she gave the world premiere of Lera Auerbach’s 24 Preludes for Violoncello and Piano with the composer at the keyboard, and the two have subsequently reprised the work at the Schleswig-Holstein Festival, the Kennedy Center, and for San Francisco Performances. Joseph Hallman, a 2014 Grammy Award nominee, has also written multiple works for Weilerstein, including a cello concerto that she premiered with the St. Petersburg Philharmonic in 2008, and a trio that she recently premiered on tour with Inon Barnatan and clarinetist Anthony McGill.

Born in 1982, Weilerstein discovered her love for the cello at just two and a half, when her grandmother assembled a makeshift set of instruments from cereal boxes to entertain her while she was ill with chicken pox. Although immediately drawn to the Rice Krispies box cello, Weilerstein soon grew frustrated that it didn’t produce any sound. After persuading her parents to buy her a real cello at the age of four, she developed her natural affinity for the instrument and gave her first public performance six months later. At 13, in October 1995, she played Tchaikovsky’s “Rococo” Variations for her Cleveland Orchestra debut, and in March 1997 she made her first Carnegie Hall appearance with the New York Youth Symphony. A graduate of the Young Artist Program at the Cleveland Institute of Music, where she studied with Richard Weiss, the cellist also holds a degree in history from Columbia University, from which she graduated in May 2004. In November 2008, Weilerstein, who was diagnosed with type 1 diabetes when she was nine, became a Celebrity Advocate for the Juvenile Diabetes Research Foundation. 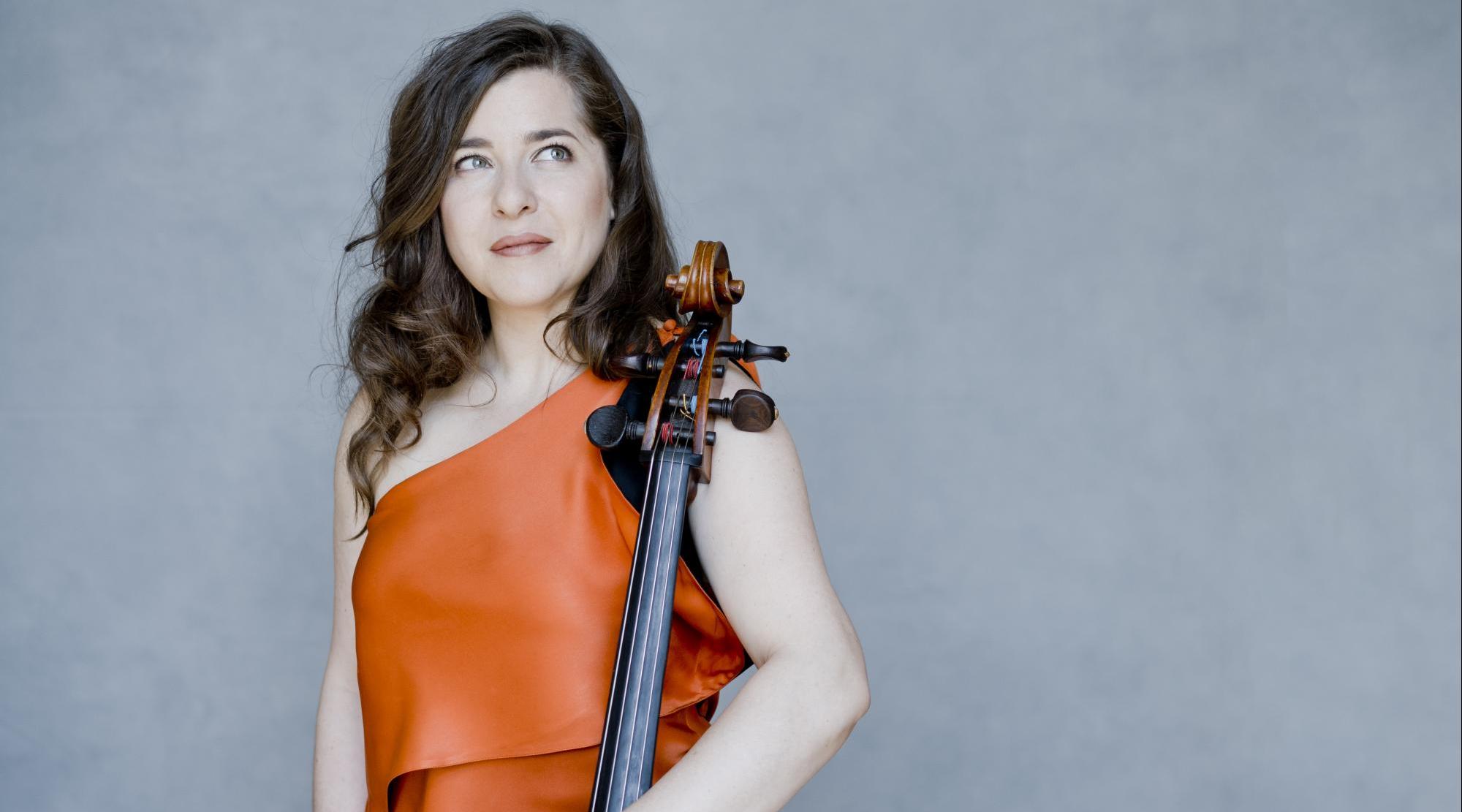