Hailed by “Die Welt” as “one of the most promising stars of tomorrow”, the young Greek conductor Dionysis Grammenos made his debut at the age of twenty-one with the Vienna Chamber Orchestra.

Recent highlights include his appearance at the Konzerthaus Berlin with Beethoven’s “Eroica” Symphony, his debut with the Cameristi della Scala & soloist Khatia Buniatishvili, as well as with the Athens State Orchestra for a concert dedicated to the 200th anniversary of the Greek Revolution. He has recently collaborated with violinist Renaud Capuçon, conducting Mendelssohn’s Violin Concerto in E minor with the Cameristi della Scala. For the 2022/23 season, Grammenos will conduct again the Cameristi, offering a programme of Italian Baroque music. He has recently taken the position of Artistic Director at the Corfu International Festival, and will also debut with the Belgian National Orchestra with a programme of Ravel and Debussy.

Grammenos has worked with orchestras and opera companies such as the Canadian Opera Company in Toronto, together with Johannes Debus on productions of “Eugene Onegin” and “The Abduction from the Seraglio”, Lucerne Festival Strings, Chamber Orchestra of Belgium, Deutsche Staatsphilharmonie Rheinland-Pfalz, Hofer Symphoniker, Malta Philharmonic, Odessa Philharmonic, Thailand Philharmonic, Thessaloniki State Symphony Orchestra and National Youth Orchestra of Scotland among others.

In 2016 he received a Conducting Fellowship at the Aspen Music Festival, where he conducted a series of concerts with symphonic repertoire and opera. He has also been selected by David Zinman to conduct the Tonhalle Orchester Zürich, as part of his annual masterclass and he has been mentored by conductors including Bernhard Haitink, Patrick Summers and Robert Spano.

Passionate about opera, he made his opera conducting debut in Würzburg with Puccini’s “Gianni Schicchi” and has conducted a gala programme including “Le Nozze di Figaro” and “Don Giovanni” with the Greek Youth Symphony Orchestra. Further operatic experience includes “La Clemenza di Tito” at the Aspen Music Festival and Verdi’s “Il Trovatore” at the Theatre Vorpommern. Initially trained as a clarinettist at the University of Music “Franz Liszt” in Weimar, Grammenos won in 2008 the Grand Prix d’Eurovision from the European Broadcasting Union and the title of “European Young Musician of the Year”. It is noteworthy that he is the first wind instrument musician in the history of the competition to receive this title.

In 2013/14 he was selected for the ECHO Rising Stars program, which took him to some of Europe’s most prestigious venues. As a soloist, he has worked with orchestras such as the Vienna Symphony Orchestra, Norwegian Radio Symphony Orchestra, ORF Radio Symphony Orchestra, Cameristi del Maggio Musicale Fiorentino, Royal Northern Sinfonia and the Südwestdeutsche Philharmonie, among others, and has performed at venues including Carnegie Hall, Concertgebouw Amsterdam, the Barbican London, KKL in Lucerne, Cite de la Musique and Auditorium du Louvre in Paris, Cologne Philharmonie, Vienna Konzerthaus and the Philharmonie Berlin. His concerts have been broadcast live on BBC Radio-3, the Bavarian Radio, the French Radio and the Austrian ORF.

Grammenos has been honoured with the Leonardo da Vinci World Award of Arts and the Gold Medal of the City of Athens. He was selected for the European Young Leaders 2018 programme, under the patronage of Jean-Claude Juncker. The programme aims to promote a European identity by engaging the most promising talents in initiatives that will shape Europe’s future.

He is the founder & artistic director of the Greek Youth Symphony Orchestra (GYSO). Under his leadership the GYSO became member of the European Federation of National Youth Orchestras and has been invited to perform for the opening concert of the Young Euro Classic festival. Since 2020, the GYSO is Orchestra in Residence at Megaron – the Athens Concert Hall. 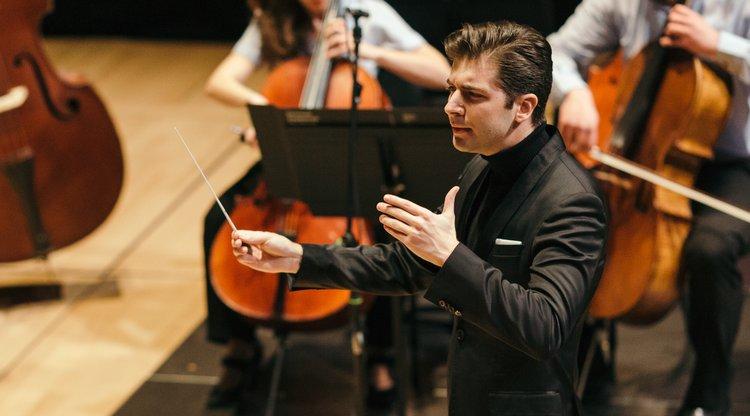