The soprano Louise Kuyvenhoven was born in Belgium and studied vocal performance at the Conservatory of Ghent. She obtained her Master degree at the Luca School of Arts, in Leuven. In the season 2019-2020, Louise was a member of the Opéra Studio de  Lyon. She has stage experience in several operas and projects at the International Opera Academy and also has numerous experiences as a soloist in solo-recitals of chamber music in international concert halls and festivals, such as Théâtre Royal de La Monnaie (Belgium), Opéra de Lyon (France), Lacmus Festival (Italy), Domaine Forget International Festival (Canada), amon other. She also performed several times at the Royal Palace of Belgium.

Currently, Louise Kuyvenhoven is an artist in residence at the Queen Elisabeth Music Chapel, Belgium, where she perfections her technique with José van Dam and Sophie Koch. She has also collaborated with Bernarda Fink, Alberto Zedda, Natalie Dessay and Stephen Smith. 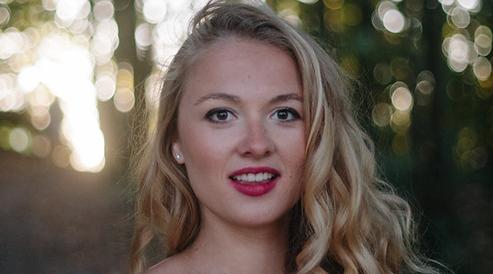