Superstar Angela Gheorghiu, the most glamorous and gifted opera singer of our time (New York Sun), was born in the small Romanian town of Adjud. From early childhood it was obvious that she will become a singer, her destiny was music. She attended the Music High School in Bucharest and graduated from the National University of Music Bucharest. She studied with the remarkable music teacher Mia Barbu. Ms. Gheorghiu’s magnificent voice and dazzling stage presence have established her as a unique international opera superstar.

Angela Gheorghiu’s rise to international stardom began with her debut at London’s Royal Opera House in 1992, when she sang Mimì in La bohème. In the same year she made her debut at the Metropolitan Opera in New York and at the Vienna State Opera. It was at the Royal Opera House Covent Garden that she first sang her much acclaimed Violetta in La Traviata in 1994, when for the first time in television and operatic history the BBC cleared out its schedules to broadcast the opera live. At one rehearsal the conductor Sir Georg Solti said: “I was in tears. I had to go out. The girl is wonderful. She can do everything.” The performance was also filmed and recorded by Decca. Newspapers and magazines noticed that “A star is born”. Since then Ms Gheorghiu has been in constant demand in opera houses and concert halls around the world: New York, London, Paris, Salzburg, Berlin, Tokyo, Rome, Seoul, Venice, Athens, Monte Carlo, Chicago, Philadelphia (with Philadelphia Orchestra), Sao Paolo, Los Angeles, Lisbon, Valencia, Baalbek, Amsterdam, Kuala Lumpur, Zürich, Vienna, Salzburg, Madrid, Barcelona, Valencia, Prague, Montreal, Moscow, Taipei, San Juan, Ljubljana, Buenos Aires and others.

Her next exclusive recording agreement was signed in 1998 with EMI Classics. She recorded an album of duets and arias with Roberto Alagna and the Orchestra of the Royal Opera House Covent Garden, Puccini’s rarely recorded opera La Rondine with the London Symphony Orchestra, Gounod’s Roméo et Juliette with Orchestre National du Capitole du Toulouse and for the second album of duets with Roberto Alagna, Verdi per due, she worked together with the Berliner Philharmoniker, conducted by Claudio Abbado.

Her recital Casta Diva was followed by a live recording of Classics on a Summer’s Evening, the concert performed alongside the Staatskapelle Dresden, Verdi’s Requiem with the Berliner Philharmoniker and the recital at the Royal Opera House in 2001, all released both on CD and DVD. The recording of a recital of Puccini arias in 2008 proved once more Ms. Gheorghiu’s profound musicality.

Angela Gheorghiu’s releases include the complete opera recordings of L’Amico Fritz by Pietro Mascagni and Fedora by Umberto Giordano (both with Deutsche Grammophon). The live performance of La Rondine at the Metropolitan Opera (2009) as well as Faust from Royal Opera House (2004) were released on DVD by EMI Classics in 2011. Adriana Lecouvreur (a Royal Opera House production recorded in 2010) was released on DVD in 2012.

In October 2017, Angela Gheorghiu releases Eternamente – The Verismo Album with Warner Classics, featuring performances of opera and songs by Italian composers of the generation that followed Verdi. The repertoire for the new album is new to her, including two duets with tenor Joseph Calleja.

In November 2019, Angela Gheorghiu released her new solo album Plaisir d’amour with Decca Classics, celebrating the 25th anniversary of her first recording on Decca Classics, with all songs never before recorded by Ms Gheorghiu – spanning four centuries in classical music.

All her CDs have received widespread critical acclaim and have been awarded many prizes such as Gramophone Awards, Diapason d’Or Awards, Choc du Monde de la Musique in France, Cecilia Prize in Belgium, Deutsche Schallplattenkritik-Preis in Germany, the Echo Award, the Italian Musica e dischi Foreign Lyric Production Award, the USA Critics’ Award etc. Mss Gheorghiu won the title of “Female Artist of the Year” at the Classical Brit Awards in 2001 and 2010.

In 1999 she took part with great success in a concert “Michael Jackson and Friends” in Munich. Ms. Gheorghiu sang at the reopening of the Royal Opera House Covent Garden (December 1999) and of the Teatro Malibran in Venice (23 May 2001) and at the opening of the new opera house in Valencia, in the presence of the Queen Sofia of Spain (October 2005) . She sang at the historic performance Prom at the Palace on June 1, 2002, which marked the Golden Jubilee of Queen Elizabeth II, a concert that is also available on DVD. She sang for HRH Prince of Wales on different occasions. In 2003 she performed at the Nobel Peace Prize Concert.

In December 2000, Ms Gheorghiu performed the title role in Tosca, the movie directed by Benoit Jacquot. The film was released in theatres around the world and received popular and critical acclaim: “She is one of the most sensuous Toscas imaginable… Angela Gheorghiu’s passion and beauty are ideal for Tosca, as if the best qualities of Callas’ and Tebaldi’s portrayals had come together.” (Opera News, USA). Angela Gheorghiu attended the Venice Film Festival in 2001 when the movie was premiered. Ms. Gheorghiu also interpreted Juliette in the movie Roméo et Juliette released on DVD by Online Classics.

Among major appearances were the much acclaimed performances of La Rondine and Pagliacci at the Royal Opera House, Roméo et Juliette at the Choregies d’Orange and the Salzburg Festival, Faust at the Metropolitan Opera in New York, Royal Opera House and Monte Carlo Opera, Simon Boccanegra at the Royal Opera House and the Met. There were also recitals in Salzburg (Salzburg Festival) and in Vienna (Musikverein) and concerts in Amsterdam (Queen Beatrix’s Silver Jubilee Gala), in New York (the New Year’s Eve concert with the New York Philharmonic, under the baton of Lorin Maazel), Philadelphia (with Philadelphia Orchestra) and Los Angeles, Vancouver and Toronto (April 2011), Seoul, Shanghai, Valladolid (May 2011), in London at the O2 Arena together with Plácido Domingo (July 2011), a concert for the opening of the Katara Amphitheater in Doha, Qatar in December 2011 (performing songs especially composed for this event by Vangelis), a concert in Oman (April 2012) and a gala concert at Teatro Colon in Buenos Aires with Roberto Alagna (April 2012). All these appearances earned spectacular reviews.

In January 2006 she triumphed with La Traviata at the Metropolitan Opera in New York. Three months later, in April, she made her debut at Teatro alla Scala in Milano with a recital, then in May she opened the Film Festival in Cannes. In June 2006 she made her stage debut as Tosca at the Royal Opera House in London in a new production that was dedicated to her. Then she returned to the Vienna State Opera for performances of La Bohème (November 2007) and to the Metropolitan Opera for a run of Simon Boccanegra and a gala performance of La Traviata (March 2007).

Angela Gheorghiu performed again in La Traviata in Rome and Milano in 2007. She also had much-acclaimed concerts in Paris (Salle Pleyel and Palais Garnier) and in Los Angeles. In September 2007 she performed the title role in the world premiere of the opera Marius et Fanny by Vladimir Cosma at Marseille Opera. Then she sang a series of much-praised performances of La Rondine in San Francisco. When Ms. Gheorghiu sang La Bohème at the Metropolitan in New York, the performance was transmitted in theatres to an audience of over one million and five hundred thousand people. Other performances broadcasted in theatres were La Traviata in Milan and Rome and La Rondine in San Francisco and New York.

In 2010 she made her much-acclaimed debut in Cilea’s Adriana Lecouvreur, a new production of the Royal Opera House Covent Garden. The Observer wrote: “It’s hard to imagine anyone bettering Angela Gheorghiu in this part. Her voice, feather-light and creamy yet with a core of steel, matches the liquid way she moves on stage. She’s a natural actress and made the improbable death scene heartbreakingly believable and her signature aria “Poveri fiori” simply unforgettable.”

In July 2011 she sung the title role in Tosca with a stellar cast led by Antonio Pappano. In September 2011 she came back to London for the revival of Faust, performance broadcast live in cinemas. In June 2012 Angela Gheorghiu celebrated 20 years since her debut at Royal Opera House in London performing in La Bohème.

In October 2011, Angela Gheorghiu performed at the reopening of the Bolshoi Theatre in Moscow. Later in December, she opens the open-air Katara Amphitheatre in Doha, Qatar, singing music composed by the great Vangelis especially for her.

In November 2011, she makes her debut at Carnegie Hall in New York, performing a concert version of Adriana Lecouvreur.

In 2014, Ms. Gheorghiu had performances of Adriana Lecouvreur, Tosca and La Bohème in Vienna, as well as concerts in Amsterdam, London, Prague, Munich, Hamburg and Vienna (Konzerthaus) and recitals in Barcelona (Gran Teatre del Liceu) and Milan (Teatro alla Scala).

In March 2015 she made her stage debut in Werther at the Vienna State Opera, under Frederic Chaslin’s baton, and reprised the role with great success at the Salzburg Festival later that year.

She returns at the Metropolitan Opera as Tosca in October/November 2015, with reviews praising her complex portrayal of the title role.

In 2016, she reprises Tosca at London’s Covent Garden, Vienna Opera House and the Berlin State Opera. She performs in concerts in Vienna, Dublin, Gstaad and Salzburg among others.

2017 marks her 25th anniversary with the Royal Opera House in London, where she reprises with great acclaim Adriana Lecouvreur, celebrating also the 150th performance on Covent Garden’s stage.

In the past years, Ms Gheorghiu achieved great successes with concerts and recitals around the world (Paris, Madrid, Moscow, Hamburg, Geneva, Tokyo, Vienna, Berlin, Istanbul and so on), as well with opera performances of Tosca, La bohème etc in London, Vienna, Hamburg, Dresden and Berlin.

All these performances and recitals have confirmed Ms. Gheorghiu’s status as one of the most beloved stars of opera. In her interpretations, Angela Gheorghiu meticulously devotes herself to the finest details of composers’ scores, and, in the tradition of the greatest singers in history, synthesizes objective truth and subjective inspiration, subtly balancing these two poles that are the vital Ying and Yang of opera performances.

Ms. Gheorghiu was honoured with “La Medaille Vermeille de la Ville de Paris” and she was appointed an “Officier de l’Ordre des Arts et Lettres” and “Chevalier de l’Ordre des Arts et Lettres” by the French Ministry of Culture. In December 2010 she was awarded the honorific title of “Doctor Honoris Causa” by the University of Arts in Iași (Romania) and the “Star of Romania”, the highest decoration given by the President of Romania. In October 2012 she was conferred the “Nihil Sine Deo” royal decoration from His Majesty King Michael I for promoting Romanian cultural values abroad. In October 2014, Angela Gheorghiu was awarded the Doctor Honoris Causa honorary title from the Gheorghe Dima Music Academy in Cluj Napoca (Romania).

In October 2015, she received the European Cultural Award for Music, in Dresden, on the occasion of the 25th anniversary of the German reunification. In May 2017, Angela Gheorghiu is awarded the Doctor Honoris Causa title from the University of Bucharest.

In February 2018, Angela Gheorghiu was honored in France with the Victoire d’Honneur Award at Les Victoires de la Musique Classique. In December 2018 Angela Gheorghiu is honoured in Italy with the prestigious Premio Puccini for her memorable worldwide Puccini interpretations.

In October 2018, in London, she has launched her first autobiography – Angela Gheorghiu: A Life for Art, written together with Jon Tolansky.

In the history of opera, Angela Gheorghiu shines as a rare phenomenon: not only a singer/actress with an exceptional vocal technique and profound dramatic and musical intelligence, but also a magnetic communicator who penetrates the hearts and minds of a panoramic spectrum of audience.  She has brought the very highest values of operatic art to a vast worldwide community on an unusually broad scale. 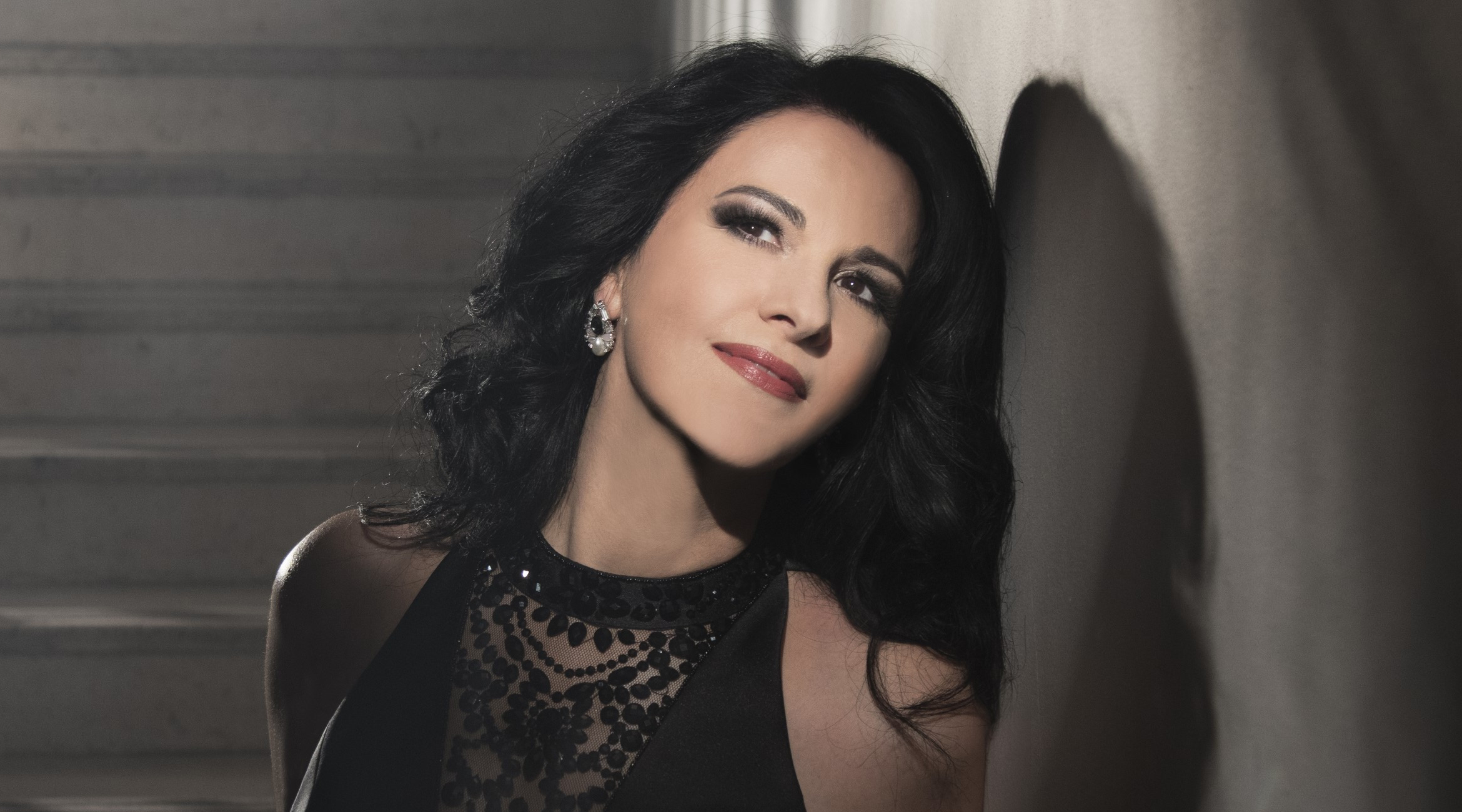