David Reiland is appointed Principal Guest Conductor of the Munich Symphony Orchestra from Sept 2019 on and is presently Principal Guest and Artistic Advisor of the Opéra de Saint Etienne as well as musical Director in Metz and Lausanne. Schooled at the Royal Music Conservatory of Brussels, before studying Orchestral Direction at the Alfred Cortot School in Paris - each time awarded with the highest prices –he was assistant at the Mozarteum Salzburg, working with maestros Dennis Russel Davies and Jorge Rotter and conducted three years cycle of Mozart Symphonies with the Mozarteum Orchestra Salzburg.

Since 2006, David has been conducted with highest praise Mozart and French Romanticism. His London display his passion: debut in 2012 conducting the OAE and the BBC Symphony Choir at the Royal Festival Hall with a performance of Berlioz’s Romeo and Juliet.

In 2014 he was invited to the Bolshoi for a series of Carmen, which he conducted the year after in Paris/Opéra de Massy. In 2016, he was invited to lead the world recreation of Gounod’s last Opera Le cinq mars at Leipzig Opera, in 2017 he conducted Hoffmann’s tales in St Etienne and in 2018 Faust by Gounod. In 2018 Paris proposed – again in Massy – Samson et Dalila and Antwerp & Gent (Royal Flemish Opera) Les Pêcheurs des Perles. In May 2019 Reiland takes on Les Pêcheurs des Perles in Luxembourg and a new production is planned for the Grand Théâtre de Genève in December 2021.

Acclaimed for his Mozart interpretations, he has reached journalists and public opinion at Saint-Etienne in 2014 with the Magic Flute and Clemenza di Tito, as well as in Paris with the first Mozart Opera, Mitridate, re di ponto, which makes him a much sought-after

Mozartian leader today and has earned him a new production of Cosi fan tutte at the National Korea Opera in Seoul, Idomeneo, Zauberflöte and Clemenza di Tito in Saint Etienne. In 2019-2020, he returns to the Leipzig Opera House for a new Magic Flute, still in Mozart’s repertoire and he also returns to the Tonhalle Orchestra Düsseldorf before making his debuts at the Konzerthausorchester in Berlin with Mozart. At the Opéra national de Metz David will conduct a new Traviata and Fidelio in 2020 and 2021.

In Brussels, in 2014, he was the first Belgian conductor to lead the Belgian National Orchestra in 20 years. He regularly returns there, just like to the Royal Philharmonic of Liege, with whom he explored Bartok and Huybrecht as well as Wagner this season.

In October 2018 David opened his season with the Metz National Orchestra at the Saint-Louis cathedral of the Invalides in Paris, for two concerts of Mozart’s Requiem, followed by a Mozart/Schumann evening at the Théâtre des Champs-Elysées at the head of Paris Chamber Orchestra. Very well-known in Munich, David Reiland brings the Munich Symphony Orchestra to the Concertgebouw in Amsterdam in July 2019.

In June 2012, he conducted the world creation of « The Raven », monodrama for mezzo-soprano (Charlotte Hellekant) and Toshio Hosokawa’s group (Lucilin), production he brought to the Amsterdam’s Concertgebouw and at Bouffes du Nord at Paris and brings him to the Bilbao Opera House in november 2018. With the Munich Radio Orchestra, a monographic programme of Benjamin Godard’s work (Symphony n°2, Gothic Symphony, 3 tracks) was released in January 2016.

With the Royal Philharmonic of Liège, Reiland is recording a series of CD’s dedicated to the work of Albert Huybrechts to be issued in 2019. In February 2019 Reiland recorded the world première of Thiery Escaich’s “Concerto pour Orchestre”. 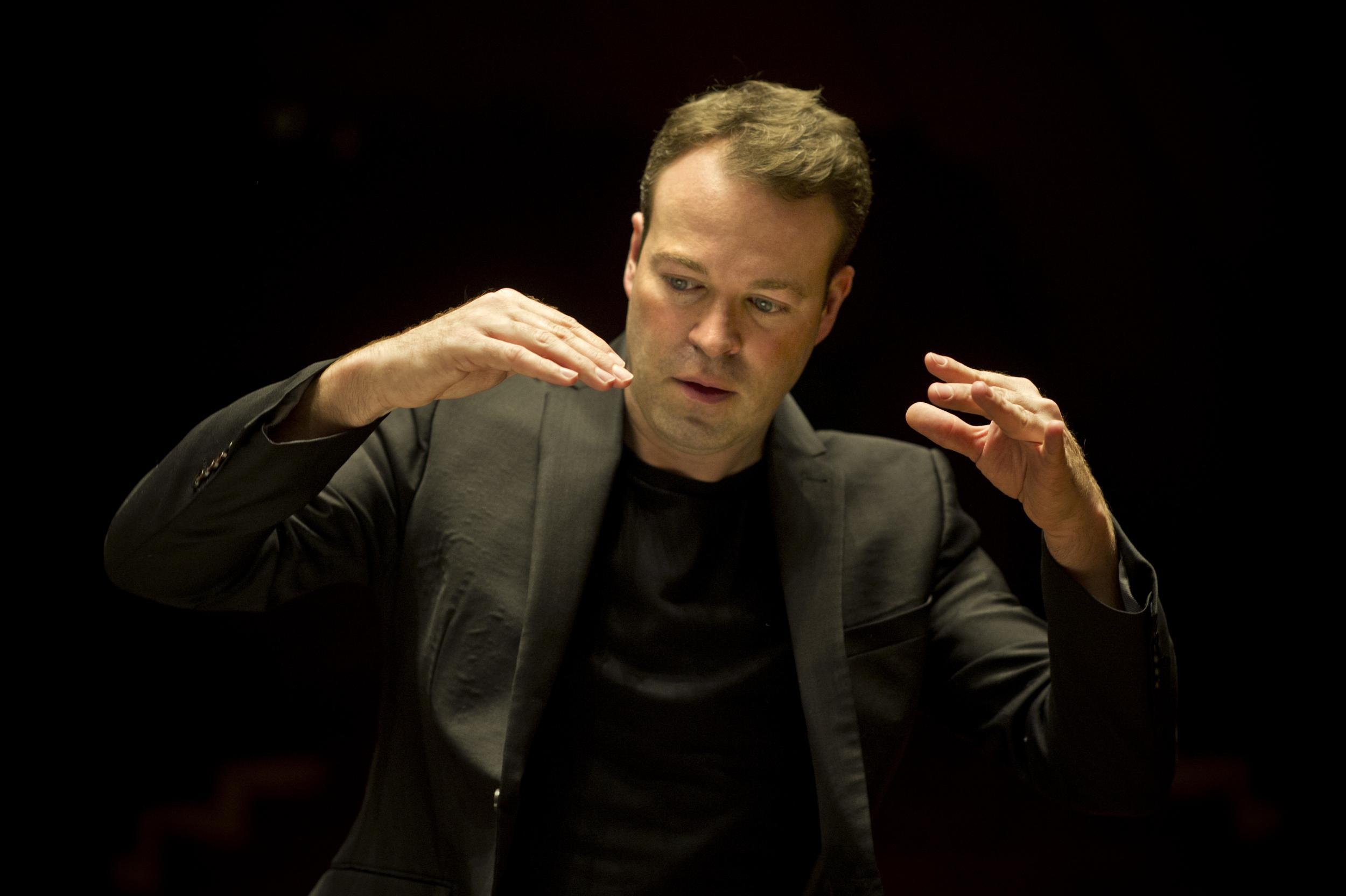